skip to main | skip to sidebar

The Cross at Stonehenge

The Cross at Stonehenge

This past year, the last week of September and first week of October, I took my first trip “across the pond” to my spiritual home – England. Life finally arranged everything to come together after half a century of waiting. I joined a wonderful spiritual tour – Sacred Sites Journeys © that had and has as its primary focus a celebration and exploration of the Goddess as She manifested in ancient times and as She still manifests today. The tour centered primarily at Glastonbury, with day visits to Wells, Bath, Avebury and Stonehenge. There were many points of connection with and celebration of the Goddess, especially at the Chalice Well and Goddess Temple in Glastonbury. As “fate” would have it, I injured my hip and knee a few years ago and was not able to actually participate in any of these rituals and deep experiences. I was not able to climb Glastonbury Tor, or even the hill to the Chalice Well. There were several gatherings in the evenings that I was too tired to attend. Nevertheless, at each of these times I ended up having my own special experiences in each place and was full of joy and contentment throughout.

I spent a couple of hours in the Chalice Well garden and wondered how the fountain at the vesica piscis-shaped pool came to be a flowform by John Wilkes. These flowforms were developed out of indications by Rudolf Steiner. I have been a student of Anthroposophy since I was sixteen years old. 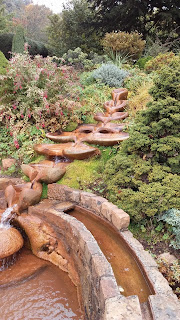 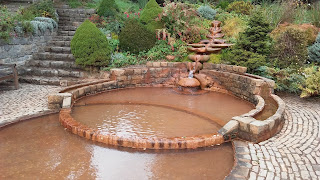 At Bath, I couldn’t manage the Cathedral tour, but I had my own English Tea in the Pump Room. I couldn’t visit all of the standing stones at Avebury, but I had a sun-filled Autumn lunch and my Angel sent me a penny, as is his wont. (American penny!)

During the tour, our group had a private time early in the morning at Stonehenge. I was able to participate in the ritual that our special guides, Lynne and Michael had arranged for us. We celebrated the elemental energies of the four directions and asked for their blessings.

Afterward, we were allowed to explore the site, but not actually touch any of rocks. One of my fellow pilgrims captured what we all agree is a fairie entity on video (a small blue dot of light that moves around quickly while the camera is perfectly still.) I also captured something amazing in a photo taken as we were leaving the site. I turned and snapped a couple of pix of the great monoliths. Only when reviewing them later, did I discover something truly startling that appeared when I enlarged them. I showed the image to my friends in Glastonbury, who agreed that there is something noteworthy there.

After the tour, I was able to visit friends from the 80s, who live in Sussex, near Michael Hall school. They both work at the school. Their oldest son is my godson. We haven’t seen each other or kept in touch since he was a baby. He is now 36 years old. I was blessed to be able to get to know him and hope that our relationship will continue and deepen. We went to Emerson College late one afternoon and talked about the fact that it has ceased to be what it once was. There are courses given still, but it is no longer a functioning college. We also went to a pub and had a great meal and more great conversation.

During this part of my trip, I stayed at a lovely B & B owned and operated by a woman whose children went to Michael Hall and who has her own fascinating life story. When I showed her the photographs, she suggested that I write an article and send them to the National Trust newsletter/ magazine. I agreed and said that I would. But after I returned and allowed my experiences to settle in my soul, I had a difficult time considering what to write about the photos and what they might mean. I would have liked to write something wise and meaningful out of a profound knowledge of Celtic Christianity. Unfortunately, I don’t have a profound knowledge of Celtic Christianity. I know that I have a deep and profound karmic connection with Celtic Christianity but I am only beginning to explore what it is and what it means.

Shortly before my trip, I sent for and began reading the book, “The Flaming Door” by Eleanor C. Merry, a woman deeply connected with the Christian Community, which came into being with the assistance of Rudolf Steiner in the 1920s. I thought that I would have an easy resource that would give me lots of “profound” nuggets to share with my fellow pilgrims during the trip. But no – right into the deep end here. I only just “finished” the book yesterday and it is far, far from finished. I will probably read it several times again before the end of this lifetime and still not totally understand it. Meanwhile, I have ordered dozens of books from my dear Ebay on Celtic Christianity and Celtic Consciousness. Now, all I want to do is create the freedom in my life to devote myself to years of study.

Yes, the Goddess in Her many forms and avatars. Her ancient manifestations are wondrous and have much still to teach us. 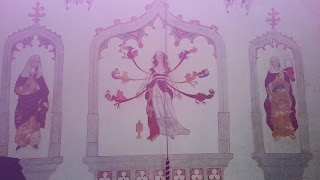 In “The Flaming Door”, Eleanor Merry takes us back to the ancient times of the Druids and even farther (out of the knowledge of spiritual Earth evolution given by Rudolf Steiner). She explores the reality of Ceridwen and Hu and continues to illuminate what happened in Europe (especially Great Britain) and America during the coming of Celtic and Roman Christianity. As I said, I am barely at the surface of understanding these things, so can go no further in explaining them here. Nevertheless, I know out of earlier studies of Rudolf Steiner’s “Occult Science” that all of the Mystery schools and streams of development contained within them the secret of the coming of the Christ Being into the course of Earth evolution for thousands and thousands of years. All “Gods”, especially all “Sun Gods” were various foreshadowing of His existence in the realm of the Sun and his gradual and eventual descent into physical matter and manifestation. All “Goddesses” were and are forerunners and avatars of the Female principal of the Godhead, whose ultimate incarnation is (in my understanding) a threefold one embodied in the three Marys – Eva Maria, Maria Sophia and Maria Magdalene. For me, these are women embodying the Threefold aspects of the Holy Spirit (feminine, not masculine) as Jesus was a man preparing a physical body for the incarnation of the Christ Being, whose true identity embodies both Male and Female principles.

These statements are of my own understanding both of study of Anthroposophy and of my own heart intuitions. They may be “fact” for others or not. They are only a beginning of such an understanding which is going to literally take lifetimes of study and spiritual exploration to fully illumine. They are shared here only to make the case that I personally believe that “Christianity” existed long before The Christ Being actually became a human being on Earth. Levels and levels of experience, perception and understanding are embodied in all of the great “mythologies” of the world and some very special revelations are to be found in the ancient Celtic and Druidic cultures. However, it is important to me not to believe that just studying the past and revitalizing ancient rituals and practices will bring a person to the understanding of the real spiritual need of our time and the true direction for the future of Earth evolution. We are not meant to return to ancient forms of clairvoyance and atavism. But we are meant to re-awaken those forces in ourselves, now in a conscious, day-waking form. By all means, we need to re-visit the ancient places and read the ancient stories and texts. Now, they are to be used as a spiritual foundation for our discoveries in the New Mysteries – the Mysteries which are “occult” yet no longer hidden but available for all. 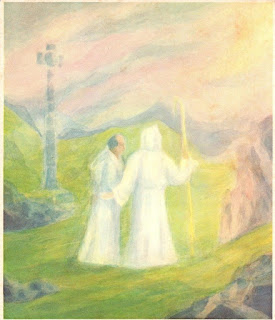 In 1977, exactly forty years ago, I completed my Foundation Year studies in Anthroposophy in Spring Valley, New York. I would be moving over the summer to Sacramento, California to take my teacher training with my mentor, Rene Querido, who has written extensively on early Christianity, particularly the school at Chartres. At the end of the Foundation Year, we were given art cards with a verse on the back. I was given the painting by Margaret Hauschka of the brothers at Iona.

Of course, I felt that it was very beautiful. But its significance and connection with myself, other than the fact that my “maiden” name is Magee (the Scots clan) pretty much escaped me. Only now, forty years later, the threads are beginning to weave this section of my life’s tapestry. Through Eleanor Merry’s book, I finally “touched base” with Saint Columba. I have enjoyed some of the legends about him and have the biography waiting here for me to read, along with twenty or thirty other marvelous volumes. Perhaps just before the end of this lifetime, I will have something interesting, meaningful and profound to say about Celtic Christianity. All I know at this point is that my Angel and perhaps a few friends on the “other side” gave me a gift the morning we visited Stonehenge – to see in a form that doesn’t get any more solid than solid, massive rock, the evidence of Christianity in the ancient Celtic world. 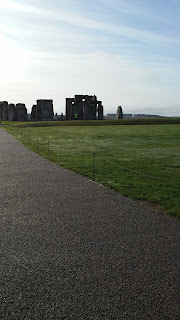 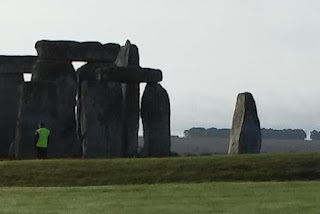 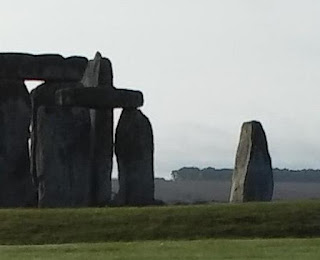 Posted by Christine Natale at 8:05 AM